While doing a bit of research for an upcoming ComTechAlert article, I was reviewing oil production stats for the US and was a bit surprised by the numbers.

Much of the attention paid to the increasing crude production in the US is focused on the Bakken field in North Dakota, and not without good reason. The shale formation underlying western side of the state has rocketed oil production in the state from a low of about 76,000 bbls/day in 1994 to more than 800,000 bbls/day currently. In fact, in just the last 3 years, North Dakota has seen an increase in daily production of almost a half million barrels. This boom has resulted in North Dakota surpassing even Alaska in production and has brought a terrific windfall for the state, reducing unemployment to virtually zero and driving enviable economic growth across one of the least populous states in the nation.

However, in terms of absolute growth and in total production, North Dakota still ranks second to Texas…in fact, by quite a distance. During the 3 year period from April 2010 to April 2013, Texas production has increased from 1.1 million bbls/day to almost 2.5 million, more than doubling the increase provided by the Bakken. 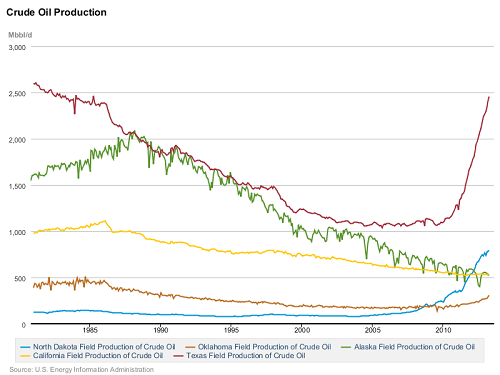 Much of the increase in Texas is attributable to the Eagle Ford shale formation, which is now adding almost 800,000 bbls/day to the state’s total, a number which many experts believe will double over the next two years. Texas has also seen additional increases from the use of advanced drilling and completion techniques in the Permian Basin region in West Texas, which when combined with improved tertiary recover methods being used in older fields in the area, has accounted for about two to three hundred thousand barrels per day of incremental production.

While I’ve found “experts” are often times wrong when it comes to energy forecasting, if they do prove correct relative to the outlookd for the Eagle Ford and the Bakken (which is also touted as doubling in the next two years), we could see an additional 1.5 million barrels coming on line from just these two fields. If declines in other fields in the two states can be offset by incremental drilling or improved recovery techniques, the combined crude production from TX-ND could surpass 5 million barrels per day, positioning the combo ahead of every country in OPEC with the exception of Saudi Arabia.